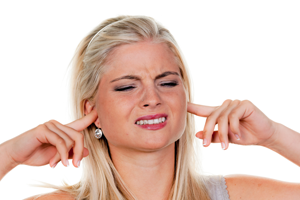 Hyperacusis can make sounds seem louder than they really are.

Hyperacusis is a medical condition that occurs when a person’s hearing becomes over sensitive to certain sounds, making then seem louder than they really are. This hypersensitivity to sound is caused by changes in how the brain processes sound and it’s usually centred on certain pitches (frequencies).

It has more than one cause and is often associated with other more common hearing condition called Tinnitus. If left untreated, it can lead to increased stress levels, anxiety and phonophobia – a psychological fear of sound.

Having Hyperacusis can result in certain sounds, such as traffic noises, machinery noise and short sharp sounds becoming uncomfortable and sometimes unbearable. The sound hypersensitivity caused by the condition varies from person to person and ranges from having certain sounds being slightly more annoying than others to actually cause pain and dizziness.

The most common causes of the condition are exposure to dangerously loud noises and the presence of other hearing and balance problems. In some cases, it can occur as a result of a head injury or head surgery.

The two most common types are:

Hyperacusis is treated in a similar way to Tinnitus, through the use of broadband noise, sounds and music-based therapies that increase the brain’s tolerance to certain sounds and pitches.

People with the condition can use ear plugs and ear muffs to avoid hearing sounds they have a lower tolerance for if they know they are going to be present in certain situations.