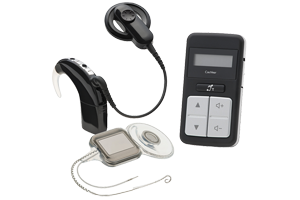 Cochlear Implants, also known as the Bionic Ear, are suitable for people with severe Sensorineural Hearing Loss who have limited or no benefit from wearing Hearing Aids.

Cochlear Implants work by having a sound processor worn behind the ear which has a microphone that picks up sounds in the wearer’s environment. The sound processor then converts the sound into an electrical impulse that passes through the skin to a receiver surgically inserted and attached to the skull. The receiver relays the electrical impulse to an electrode array that has been surgically inserted into the Cochlea to produce the sensation of sound at specific frequencies (pitches).

Cochlear Implants do not restore a person’s hearing completely and the quality of sound created by the devices is low compared to hearing sounds naturally. Instead, they provide hearing abilities that allow wearers to have a better understanding of speech and an awareness of sounds in their immediate environment.

Having Cochlear Implants are only a small part of the hearing loss management journey to have better hearing. When you make a decision to have Cochlear Implants it should be part of an overall therapy program with a qualified hearing health professional, such as an audiologist, who can work with you to help your brain make sense of the new information being sent by the implants.

Newer Cochlear Implant technologies are improving recipients’ ability to hear conversations in noisy environments, enjoy music, and even use their implant processors while swimming. In addition to having remote controllers, they are also becoming increasingly compatible with smartphones, which can be also used to monitor and control the device.

The Cochlear Implant was pioneered in Australia by Professor Graham Clark at the University of Melbourne with the first prototype implanted in 1978.

It was commercialised by Cochlear Ltd in the early 1980s and has since undergone significant technological refinements and evolutions. It is now used throughout the world to help people with significant hearing loss.

The HEARing CRC, and its previous incarnations, have played a central role in developing new Cochlear Implant technologies including electrode design and sound processing to enhance the listening experience of Cochlear Implant recipients.

Watch the video below to see how a Cochlear Implants works (video courtesy of Cochlear Ltd).